"There is a unique energy surrounding the Boston Marathon that you can't help but feel. It includes every runner and every person along the course. It brings every person there together as one."
Amy Hastings 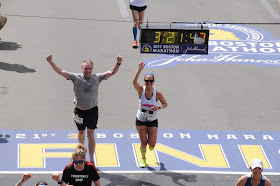 Oh man.  What a day.  I still am feeling all the feels about this race. It was just incredibly magical and amazing. I feel so honored to be a part of this historic race & I can't wait to do it again!

The morning started out like most.  I woke up before my 5am alarm. I was having a dream about getting an Uber with Colleen and the uber just kept driving around, so I decided to just get up. Haha.  I made my usual cup of coffee, plain bagel w/ almond butter, honey & cinnamon & a full 16 oz bottle of water with Nuun active + 2 Nuun Plus tabs. I checked, rechecked, packed and repacked my bag that I would take on the bus and to the village.  This was also the first race I ever decided to carry a small handheld water bottle.  At first the purpose was to avoid the first few water stops because I heard they get crowded, but I think this was a huge bonus for me on race day.  I kept it until about mile 25 where I just chucked it. 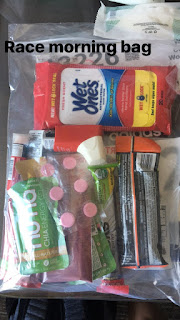 It was already 63 at 530 so I literally changed my outfit 4 times trying to figure out what the best option would be. 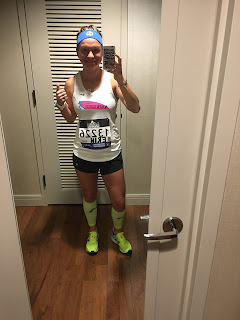 I headed down to the lobby around 645 to meet Colleen and we made our way to the buses.  I dropped some post-marathon gear off (including my phone which was a huge plus to find my fam after) and then we ran into some our team! 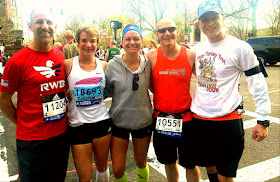 BUS LOADING: There were sooo many people, but it was all very seamless.  We were able to use the bathroom and get right on a bus.  It was nice to have all of us together to keep me calm on the hourish bus ride.  As soon as our bus got the okay to let us off, we ran into the woods to pee.  It was a long ride haha.

ATHLETES VILLAGE + START LINE: We walked through the village to the spot we had picked out to meet up with Allie and we found her right away! We had a great spot under the tent and out of the shade, which was a huge plus.  After 2 more bathroom stops, Bettina & I headed to the start.  It is about a mile walk, but it was probably the fastest mile walk of my life.  Spectators along this mile had bathrooms for people to use and one family had a huge table set up with glide, Vaseline, sunscreen, markers, etc...basically any last minute thing you needed!  That was awesome! Once we got into the corral I had a nervous pee feeling and asked to hop out.  I followed some other runners behind a building and THERE WERE PORTOPOTTIES.  I was very happy :) I got back into my corral and Bettina & I ran into Nicole (IG thegirlwhoraneverywhere) and decided to try to stay together for as long as possible to get each other to the finish line.  I had a solid plan that I had gone over with my Coach  and I was very committed to it. The first few miles are down hill. Combined that with the electricity of running the Boston Marathon & that could be disaster later on in the race. So the plan was to hold back miles 1-5, GMP effort until the hills (not running the downhills hard), coming through the half around 1:39:15, in Newton run the uphills easy & the downhills hard, miles 21-23 increasing pace 5-10 seconds per miles and from 23-end whatever I had in the tank to GO.  I hadn't let the heat enter my mind until I was standing there waiting to start.  There were no clouds and it was HOT.  I took a hammer gel and then we were off.

MILES 0-5: I was not anticipating how crowded it really was going to be.  It was hard to get into a groove for a quite a few miles.  I had heard to try and stay in the middle of the road, but knew early on I wanted to be on the right side, mainly because that's where Allie told me go.  Also that's where my family was going to be & where I could grab water from spectators.  From the first water stop until the end I was taking 3-4 cups of water.  Dumping 3 cups on my head and 1 to drink.  I tried every other stop to also take gatorade. The water stops were probably the most frustrating part.  The volunteers were incredible, but it was hard to get around everyone.  I pretty much ran into someones back at every water stop. Something I tried to picture in my head was the crowds of people. Sitting here typing this and thinking back to them just brings a huge smile to my face.  There is nothing like the crowds of spectators in Boston.  Lining the streets, sometimes 3-4 people deep. Encouraging you, pushing you on, smiling and cheering.  I gave high 5s & grabbed water bottles and cups of water from any spectator that was offering it.  I had put 4 of my fave Huma gels and a tube of Base Salts in my handheld and took my first gel at mile 5.  Once it was down I went to take a sip of water from my handheld and realized everything was gone.  I forgot to zip my pouch and my gels and salt fell out.  I had a few minutes of panic.  I had 2 chocolate caffeine Huma gels & 1 pack of Cliff watermelon blocks in my pockets.  I try to not take caffeine until the end because it messes up my stomach during intense workouts and races and I ALWAYS take salt during marathons because I'm a very salty sweater.
(7:51, 7:35, 7:33, 7:35, 7:35)

MILES 6-11: I spent the next 2-3 miles pretty mad at myself.  I kept checking my pockets to make sure I didn't put stuff back there, but nope.  Around mile 8 I saw a sign that all med tents had Leg Cramp packets, but wasn't going to veer off course just to get some. At the next med tend area they had a table out on the course with the packets and I grabbed a handful of Leg cramps. I took 4 tabs right away. I started taking a block every 3ish miles.  Continued dumping water at every stop.  Whenever I could grab a bottle of water I'd dump it on me, fill my water bottle and pass it along to other runners.
(7:25, 7:31, 7:32, 7:29, 7:38, 7:31)
MILES 12-16 : I was not really feeling great until I got to mile 12 and knew I had lots of great stuff ahead.  At this point I stopped giving high 5s to conserve as much energy as possible.  Once I reached Wellesley I pretty much had a permanent smile on my face.  Wellesley Scream tunnel, Oiselle cowbell corner, seeing my teammates Jon, Dennis & Deanne along the course :) I took another gel somewhere during this time.   I made the turn at the Fire House (mile 17ish), saw my Mom & Greg and that gave me the boost I needed to head to the Newton Hills!
(7:27, 7:24, (1:39:48 at the half), 7:27, 7:33, 7:17)

MILES 17-21 (the Newton Hills): These miles really flew by and are probably my favorite miles. I had waited all morning to see my mom and that just propelled me up those hills!! We had spent lots of time figuring out logistics because I knew I wanted to see her at this point in the race.  Everyone warns you about these hills. Maybe it's because I was prepared, but I didn't think they terrible.  I just kept telling myself to RELAX on the uphills.  There was SO much energy from the crowds!!! It was electrifying! I took a gel on one of the hills.  Heartbreak is a long, steady climb, but there's an amazing downhill after (even though the downhills really hurt at this point). Once I got to the top of heartbreak I was SO STOKED. There was a guy at the top was a sign saying "The Heartbreak is Over" & I'm pretty sure that's what I was pointing it, but who knows at this point.
(7:39, 7:40, 7:28, 7:25, 7:46)


MILES 22- 25: Boston College was definitely louder than the scream tunnel in my opinion.  My right foot was killing me at this point.  I knew up ahead at mile 25 would be my husband, MIL & SIL & I  just wanted to see that damn Citgo sign.  These miles seemed to take forever.  I hadn't been sweating for a while and I couldn't stomach gels, chews or gatorade anymore.  The Citgo sign came into view, I ran past it and then looked over to my right and saw a sign that said "Go Little Runner Girl!"  "That is so nice" I thought to myself and looked up and it was my fam :) 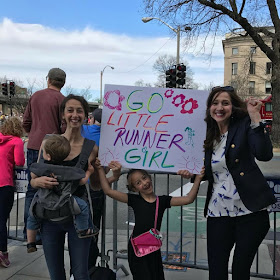 MILES 26- FINISH:  I was familiar with the end of the course because I've done the 5k 3 times, but I was not ready to be there already, for the race to end.  Coming up the small hill under the bridge and seeing that everyone was turning right, I just want to replay this moment in my head over and over.

Right on Hereford, Left on Boylston 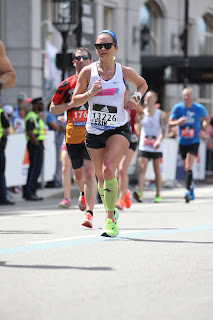 I felt an overwhelming sense of every emotion. I was running in the footsteps of great runners, Meb, Shalane, Kara, Joan, Bobbi, Katherine.  I ran past the spots where bombs went off and changed peoples lives forever just 4 years before. I was running past crowds, 10 people deep & with  thousands of runners who refused to let that change anything. I made it.  I was about to be a Boston Marathoner.
(7:21, 6:39) 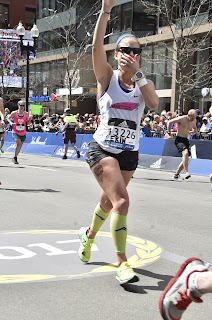 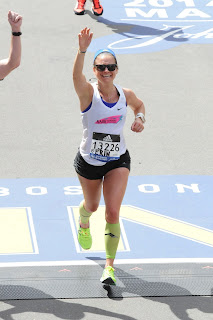